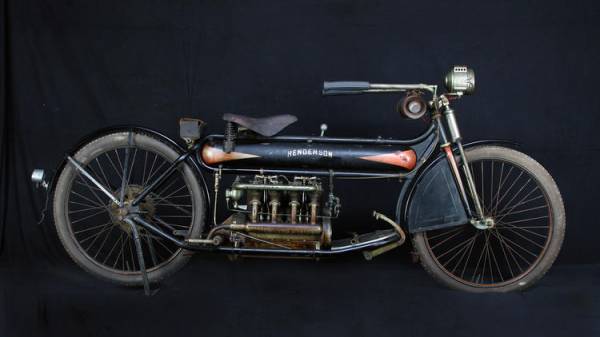 The Mecum auction house sold almost 900 motorcycles at its recent four-day Las Vegas event. The top seller was this 1912 Henderson Four, which sold for $490,000 plus buyer and seller fees. (Mecum)

The world's largest vintage and antique motorcycle auction scored $13.7 million in sales during its the recent four-day Las Vegas event.  The Mecum auction house said it sold 868 of the 949 motorcycles that came across its South Point Arena stage, for a 92% sell-through rate.

The top Mecum seller was a rare, unrestored 1912 Henderson Four antique motorcycle, which went for $490,000, plus buyer and seller fees.

European motorcycles did less well. The highly anticipated Guy Webster Italian collection, covered here in an earlier story, underperformed. While three vintage MV Agusta bikes went for an average of $30,000 each, and two FB Mondial race bikes sold for slightly more than that, a pair of rare Ceccato Grand Prix motorcycles failed to reach their reserve prices and were not sold.